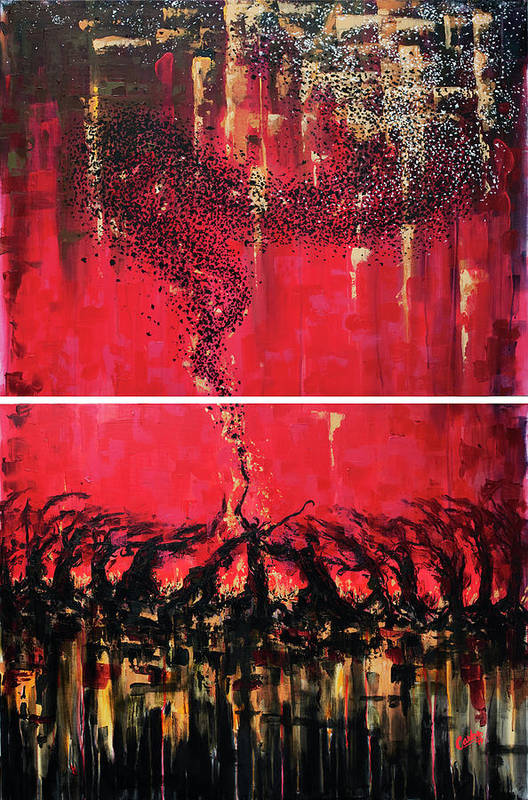 Rolled in a Tube

Starling, Darlings poster by Carlos Flores.   Our posters are produced on acid-free papers using archival inks to guarantee that they last a lifetime without fading or loss of color. All posters include a 1" white border around the image to allow for future framing and matting, if desired.

I think there’s usually more going on in the subconscious than we’ll ever know and art has an interesting way of tapping into that. Lately I’ve... more

I think there’s usually more going on in the subconscious than we’ll ever know and art has an interesting way of tapping into that. Lately I’ve been doing some research on Taínos (original inhabitants of Puerto Rico, first to greet Columbus and the rest of his sickly terrorist friends, whose beautiful culture still permeates our own despite having been basically killed off in horrific genocide, who make up 10% of my blood). And while they were not on my mind when I started this painting, they were as I finished it. This image may not represent any of their stories, but I feel somehow connected to them via a natural mysticism that lay at the foundation of their beliefs and has followed me since I can remember. The original for this painting is on two separate 40"x30" canvases, meant to be mounted one above the other.

Carlos is a writer, cinematographer, painter and composer. He is the founder of Watcheye Studios, a new film and art production company, and likes to keep himself grounded doing theatre work on the side. Born in Puerto Rico, raised half there and half in the states, and bi-identifying, his work often explores queer themes and cultural/linguistic diaspora and seeks social relevance and respect for humanity. He lives in Denver, CO with his wife Connie and their watch-eyed dog, Nutmeg. Watch on Vimeo: http://vimeo.com/watcheyestudios Follow on Instagram: @WATCHEYE_STUDIOS